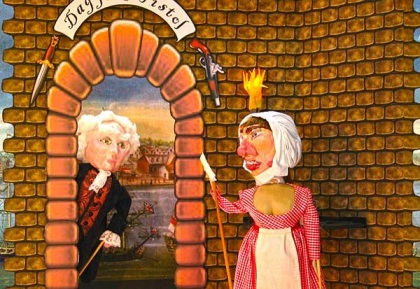 Mistaken identities and the misreading of situations form the core of farces.

They set in motion a series of misunderstandings that are compounded throughout the play.

The result is always hilarity and the ending always happy.

One device used to create a misunderstanding is the misdirection of a letter.

For example, elderly Mr. Smith goes to the races with his unmarried sister, Miss Smith, and his very young wife, Mrs. Smith.

A prospective suitor easily mistakes the wife for a daughter and the sister for a wife.

His letters to “Miss Smith” and her amorous responses result in comical scenarios throughout the play.

Sometimes letters are delivered to the correct individual, but the recipient believes them to be from someone other than the actual sender.

Such is the case in “Captain Crook and the Missing Treasure” when Anne receives a love letter signed only C.C. and thinks it’s from her object of adoration, Captain Crook.

It is instead from an old man named Claude Clouseau.

Another device is bits of conversation overheard but out of context.

In Captain Crook, Anne’s misunderstanding is reinforced when she overhears Crook’s romantic musings about “Anne,” not knowing that Crook’s monologue is not about her, but rather his ship that bears her name.

If you remember nothing else, know that farces are based on situations that never happen in real life.

The situations in a farce are absurd, but absurdity is part of the whole package.

You’ll never hear anyone who’s seen or read a farce say, “Yeah, that happened to me once.”

For more info contact Robin and Susan Tafel at 215-441-4154 and visit https://www.YouTube.com/user/PennsWoodsPuppets.