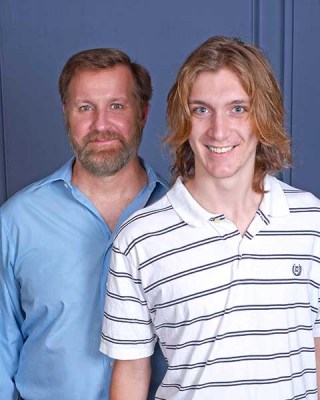 Many Americans are unaware of the unspoken reality that thousands of US military service veterans die alone and go unclaimed in gravesites across the country every year, despite the military credo of “no one left behind.”

A Lower Bucks County resident has taken it upon himself to work toward “the goal of ensuring all veterans are buried with honor, recognition, and respect,” and in the process promoting the use of technology to document the history of these unclaimed veterans and his or her accomplishments.

Since then, the nonprofit has expanded across the country through NAGA’s mission and outreach.

“There’s literally not a cemetery around that doesn’t have unclaimed veterans,” says Dan.

Most recently, Dan and his son, a Pennsbury High School senior (also named Dan), set to the road to prove just how much of a widespread issue this, and how seemingly simple actions can leave a lasting ripple effect.

Their trip took them 10,000 miles total, across numerous states including Texas, Nebraska, Florida, and others where they laid flowers on unmarked graves. The duo combined their trip with self-guided college tours and visits for young Dan, who plans to study how music affects health from a mental and physical therapy standpoint.

The pandemic threw a curve at the trip, as well as tropical storms and a couple blizzards, but did not deter the father-son team from journeying out and combatting Covid restrictions in each new state they traveled to.

“Charities were exempt from [travel] restrictions, but we still had to follow social distancing guidelines, get tested before and after arrival, and more.” This added a surreal level to the journey as Dan and his son set out to prove a point.

This model focuses on constructing a bridge from the problem back to society. In his mind, this takes the “typical” non-profit idea a step further than participating in a 5K or buying a shirt to show your support.

The steps in Project NAGA®’s model include identifying veterans; honoring them (telling their story); and forming a bridge to society where their stories are told and shared; looking at the way culture shifts and changes.

Each veteran’s story and life can create the birth of something new: a poem or a painting that would not have existed otherwise.

Seeing the widespread epidemic of unclaimed veterans dying alone, how many men and women who have served their country and then have nobody to claim them, Dan began to wonder the larger ramifications on society.

“What’s the effect on a country when there are thousands of bodies that go unclaimed?” he says. “Not only their bodies, but their identity, their wisdom they could have imparted on future generations.”

Veterans have been dying alone and going unclaimed since the Civil War; it’s a problem that extends far into the past and will continue to grow as we face further devastation from warfare.

The aftershocks on a society exist long after the wars have ended.

Prior to Covid, the Vietnam Veterans of America Chester County Chapter 436 hosted a ceremony to bury the unclaimed remains of 14 veterans stored in county morgues in Bucks, Chester and Philadelphia counties.

Representative Brian Fitzpatrick said at the ceremony, “Every single veteran, every single serviceman and servicewoman who serves our country, they have a story, and some don’t have anyone to come home to when they come home, and some people, as we’ve seen here, when they pass from this earth, don’t have anybody to claim them.”

Hundreds of mourners attended the event, proving support of the community is wide-reaching. All veterans who have served our country deserve to be remembered and held as respected members of our community; they have a family whether it’s existing blood relatives or not.

This ceremony sought to share this feeling of family with the unclaimed veterans as they were laid to rest.

Flowers-for-Eva is another initiative founded by Dan, a branch of Project NAGA® that pushes the idea forward of leaving flowers on unmarked graves. Dan paired up with Dr. Jan Cook Ed.D from Bucks County Community College to help get students involved and the project has since sparked interest across the country. For more info, you can visit flowers-for-eva.org.

Dan hopes that his work with Project NAGA® may inspire others to take a creative approach toward lasting social change.

“So many people have created something from these [veterans’] lives… a song or a painting… and that is what The Bridge™ method really stands for and encourages – to go out and do that work, to make a difference and a lasting impact and to see that evolve, to become part of our culture and continue to grow rather than being lost or forgotten in the past.”

The simplest thing you can do today that will make a difference: visit your nearest cemetery and lay flowers on the unclaimed graves of veterans who have died alone.

Take a photo when you do so; remember them, take their stories with you, share them, and create something out of that. (If you share a photo to social media, tag @projectNAGA to help spread awareness).

Through small steps, we create a bridge and leave a long-lasting impact on our community and culture to create real social change.