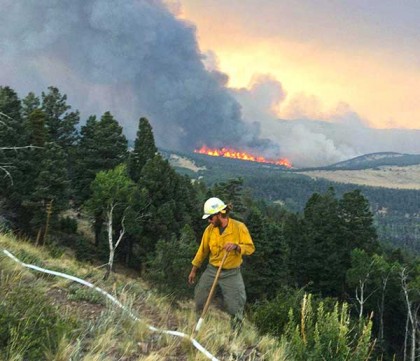 My first fire was in 2017, in Gardnerville, Nevada.  When we were initially dispatched out for it, my red card hadn’t come through so I was left behind at the station. The red card shows my qualifications, so that when I’m on a fire, the teams or whoever’s in charge knows easily my qualifications, and thus puts me in roles that are appropriate.

Only 20 minutes later the red card came through their system and was printed out.  So I hopped on a truck. They drove me out to the fireline and the captain picked me out and said, “ All right, take this pack [a backpack containing 30 pounds of hose, on top of my pack, which weighs 40 pounds] and take this tool and get up that hill.  I climbed this hill straight up to the top, planes coming down dropping retardant, helicopters.  The adrenaline, the excitement.  It’s an environment that unless you were in the profession you would never find yourself in.  And so I think that’s where the adrenaline came from.  It was just an experience I had never seen before, let alone being out West – I was brand new to the West.  It was gorgeous.  I did this huge road trip coming out here.  [My first fire] was on my fifth day of living out West.

Where are you currently seeing the most active fire behavior out West?

The most active fire behavior was actually here in Reno, along the 395 corridor around Reno and western Nevada.  The field type ground here lends itself to be light flashy fuels, so they ignite very easily.  They’re very powerful and explosive, but they die out quickly.  As soon as the night air comes in, they’re pretty much out.   The most impressive I’d have to say is in Colorado.  There’s a lot of beetlekill, an invasive species of beetle that came through a lot of these forests around the West, and they basically take all the nutrients from these trees, these big Ponderosa, Lodgepole pine tree stands.  The speed and efficiency in which trees are killed because of them is impressive.  With that beetlekill around, there’s just a lot of dead standing trees.  And so with that, when fire carries throughout Colorado, the behavior of it is definitely high to extreme.

Can you tell me about the network of wildland firefighters?

I work under the United States Department of Agriculture (USDA) for the Forest Service, but there are federal wildland firefighters that fall under almost every major land management agency – the Park Service, the Bureau of Land Management, the Bureau of Indian Affairs.  So aside from the federal agencies you also have state agencies.  You’ll see Calfire, which is the California Department of Forestry.  They have a massive [amount] of personnel, aircraft, engines, and apparatus that respond to fires.  While the federal government manages millions of acres of forestland or federal land in California, Calfire responds to a lot of their state fires or fires that have been on state or county land.  That’s true for just about every state out here.  Colorado has their own department of fire protection, [as do] Montana and Nevada.  In addition to those state agencies, you obviously have your municipal fire stations that typically out West have a wildland module attached [to their trucks], so it’s not uncommon to see a Denver wildland division out on a fire.  We all work in tandem with each other.

What type of tools does a firefighter use?

The most basic hand tools: you have your Pulaski [a combination of an axe and a hoe in one head, it’s able to dig soil and chop wood], your rogue hoe, you might have this small rake – what we call a monkey paw.  It’s used to clear fine debris up to the fireline after you’ve been scraping it away.  But basically those tools are to enable you to dig down to mineral soil, which can’t burn, and that is creating a natural barrier between the fire and unburnt fuel.

You wear a helmet, but you’re not really protected from smoke inhalation, are you?

Where has your work with your home crew taken you?

Everywhere out West: Montana, Nevada, Oregon, California, New Mexico, Arizona, Utah, plus Alaska.  The Forest Service has also gone down to Puerto Rico – it was hurricane response – to aid in that, but I have not personally gone there.  In the spring and fall, when the firefighting season is starting to taper off, we’ll go down to Florida, Texas, or Louisiana to do [what is called] prescribed burning.  [That means] low-intensity fires that you intentionally start to control vegetation growth and lessen the impact of unplanned, human-caused fire to the area.  Usually somebody works for a fuels team, so their primary responsibility is developing and managing prescribed burn plans. They’ll work with foresters in the area to develop a plan of methodical, sequenced burns to either create a natural fire barrier if a large fire were to move in to the area at some point, but then also to reduce the overall risk of devastating wildfire by putting controlled wildfire on the ground because that cleans out the understory [the layer of vegetation – shrubs and small trees – beneath the main canopy of a forest] which should be happening naturally.

Also, there are several species of trees that need fire to reproduce.  The heat of flames underneath their cones actually helps release the cones so that they [the trees] can drop them.  [Examples of such trees are the] Jack and Lodgepole pines.  Their cones only release under certain conditions.  It’s literally in their DNA to have fire come through to clean out that understory litter.  The prescribed burning throughout the West has become a highlight because it does create healthy forests and it clears out that understory that has traditionally been mismanaged due to full suppression tactics over decades without more progressive regenerative plans in place for a hundred years.

How do you see climate change affecting the West?

The climate of the West has changed so much over the years that it’s becoming hotter and drier, and fire seasons are becoming fire years.  Just as an example of that are the aspen trees. [It’s] incredible the way that all their roots are interconnected, and the trees themselves are extremely hardy and moist.  So they’ve been seen as what we call the “holding feature”.  Instead of digging a line around a fire, you might see a stand of aspen trees and not be concerned because the fire will be stopped by the aspen trees.  In the past couple of years, with this change of climate, we’ve been seeing the aspens burn down where they haven’t before.  I’m using this as an example of how fire tactics have to be more continuously changed and adapted for these unprecedented conditions.

The typical fire season runs from May until October.  Arizona, New Mexico, and Texas are having their fire season [now].  By the time October comes around, Colorado typically has a larger fire presence in the fall because it needs that time over the summer for the fuels to cure out, to really dry out, [which makes it] more prone to have fires.  But it usually stops pretty short because at those elevations snow starts coming in soon thereafter.

How did the pandemic affect the work of firefighters?

The most prevalent change were the fire camps where we would be positioned in during the campaign, or large fires.  They’ll set up a camp with a caterer, showers, bathrooms, tents for each of the logistics, communications, operations tent.  That idea got spread out where social distancing was king.  Crews were instructed to be more self-sufficient so that they weren’t interacting with other crews from around the country.  And then our crew specifically was restricted to our geographic area so that we weren’t travelling outside, trying to prevent as much interstate travel as possible. There was no Covid outbreak in my crew, and I was vaccinated in February 2021.

How do you cope with the stress of firefighting?

It’s not the job, it’s the strain on relationships.  Because it’s a career of extremes, it’s nice that I have winters off, I can see family and have time to do things.  But in the summer traditionally I might be gone for these two-week stints, so that I don’t have the opportunity to see and connect with friends and family [at that time of year.  Reunions which typically happen in the summer [I must] forego.  That work-life balance is more prevalent and more strained in the summer.  That’s where I see the most stress.  The job is fun.  I love the job.  It’s summer camp for me.

PHOTO CAP: Establishing a sprinkler system around a communications tower during the Spring Creek Fire in 2018 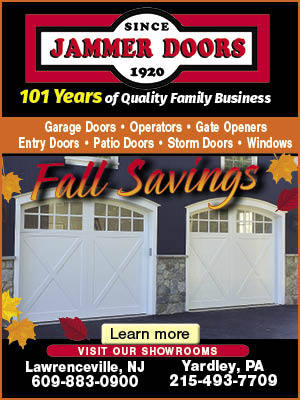