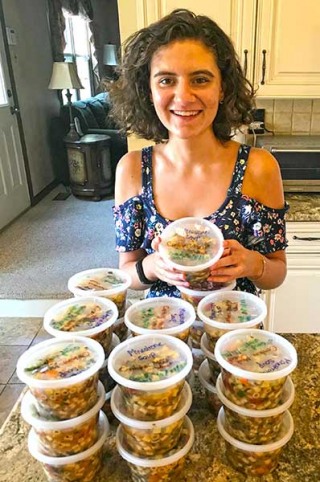 Eating well is one of the most important things we can do to take care of ourselves.

Proper nourishment helps us maintain a healthy weight and provides us with the nutrients our bodies need to function.

However, in a world where processed food is cheap, convenient, and way too tasty for its own good, maintaining a balanced diet suddenly becomes a much bigger challenge, one that people of all ages struggle to overcome.

But for Vicki Hermann, of Holland, not only did she learn how to overcome this challenge for herself, but she became inspired to help others to do the same and centered her Gold Award project, the highest award any Girl Scout can earn, around that goal.

Vicki’s story starts a couple years ago when she first wanted to eat healthier.

Instead of trying out fad diets or forcing herself to eat foods she didn’t like, she scoured the Internet to find healthier versions of her favorite foods.

Much to her surprise, she actually loved these new recipes, and it was that inspiration that started her on the path to her Gold Award.

“I wanted to teach others that they can not only eat healthy, but also enjoy the food they eat, just as I had learned,” she said.

Earning a Gold Award is not easy.

Only about five percent of Girl Scouts ever achieve this prestigious honor, and it’s not hard to see why.

A Gold Award project requires a minimum of 80 hours of work, and that’s without the prerequisites needed to teach essential leadership skills.

Girls have to identify the community need they wish to address and come up with a sustainable solution that tackles the problem long after the project is completed.

Finding the right solution may be one of the hardest aspects of a Gold Award to tackle, but for Vicki, that was rather simple.

She decided to create cooking lessons for kids in first, second, and third grade, wanting them to fully absorb healthy eating habits and carry them into their adult lives.

The first lesson was a huge success.

Vicki had the kids make low-calorie cupcakes and brownies, letting them add the ingredients and mix the batter themselves.

Afterwards, she held an interactive presentation about the importance of eating well, and then everyone got to try the new desserts.

“My favorite part was when the kids tried the food we made – and liked it,” she said. “Seeing them ask for seconds made all the work I put into planning the session worth it.”

But fate took a turn for the worst, as Vicki’s second class was set for March 14th, 2020 – right when the COVID-19 lockdown shut down everything but essential businesses.

Like the rest of us, Vicki hoped that the lockdown would be short and things would be back to normal quickly, so she passed time drafting new lesson plans.

But as the days turned into weeks and weeks turned into months, it slowly became clear that her project would not be able to continue.

However, Vicki has been a part of Girl Scouts since she was five and has completed both her Bronze and Silver Award projects, so she’s no stranger to overcoming challenges with a little support and creative thinking.

So instead of fighting against the pandemic to complete her project, she decided to work with it.

With many people losing their income and many children no longer having access to regular school lunches, hunger and food insecurities skyrocketed during 2020’s quarantine, even in Bucks County. Inspired by this issue, Vicki decided to focus on making meals to donate to the Jesus Focus Food Pantry.

There proved to be a silver lining to the COVID cloud, since Vicki’s classmates, bored after weeks and weeks of lockdown, were eager to help her out.

Many places were still closed to the public during the summer, but Vicki’s kitchen was large and had an island, allowing her group to social distance as they made minestrone soup, pasta fagioli, and other meals for the pantry.

It may not have what she had originally envisioned, but she still found ways to weave her early vision into her reworked project.

“I meshed the work with the learning by explaining to them as we went along how this ingredient is healthy and why we are using low sodium chicken broth instead of regular,” she said. “I seized any small teachable moment like that.”

Vicki held her five classes in quick succession over the second half of the summer, wanting to finish before everyone had to focus on school again.

By the end of August, the group had nearly a hundred healthy, freezable meals ready to donate and some new recipes under their belts.

Though COVID restrictions prevented her from giving her meals directly to the recipients, she still got a taste of the impact she had when she dropped the food off at the pantry.

Plenty of people were lined up to accept donations, many in nice cars, showing Vicki how many members of the community had been impacted by the pandemic and how much her delivery could help.

After that, it was down to filling out paperwork and presenting her project to the GS Council, perhaps the most tedious part, but Hermann received her well-deserved Gold Award, the first girl in her troop to earn it. However, she won’t be the last.

“I’ve helped one of my friends who is currently working on hers, and I have two more who are getting started on theirs whom I will also be helping,” Vicki said. “They all helped me with mine, so I’ll be returning the favor very soon.”

In addition to seeing the impact her project had on her students and the food pantry patrons, Vicki is now eligible for special scholarships and her story will be shared to inspire others to follow her example – both in Girl Scouting and in eating well.

PHOTO CAP: Vicki Hermann displays soups she and her team made for those in need.