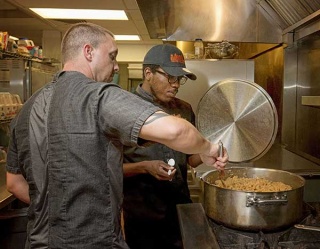 During Hunger Action Month this September, Trenton Area Soup Kitchen (TASK) has had an opportunity to reflect on where it’s been and where it’s going.

Back in March 2020, when COVID-19 forced TASK to shut down in-person service at its Escher Street dining room, it was hard to believe anything positive could come out of the pandemic.

Immediately, it was clear that TASK had to reinvent its meal service program: the soup kitchen, celebrating its 40th anniversary next year, quickly transitioned from an in-house, sit-down meal service to a take-out operation.  At the height of the pandemic, TASK’s heroic kitchen crew was churning out 10,000 meals a week – a 70% rise in productivity.

Since then, TASK has prepared and served more than half a million meals at its dining room and 32 sites throughout the area — even into Morrisville, Pennsylvania.

Joyce Campbell, Executive Director, said the lessons learned are informing TASK’s plans to address a historic hunger crisis that is expected to last well beyond the pandemic. Right now, 1.2 million New Jersey residents, including 400,000 children, don’t know where their next meal is coming from.

Exactly how TASK will respond to the crisis continues to evolve, as the battle against COVID waxes and wanes. This Fall, TASK is planning a kitchen renovation that will support its dramatically increased meal service program as well as provide additional space for its culinary training program.  For now, TASK will continue to be laser focused on boosting productivity, inspired by what the organization has accomplished over the last 18 months.