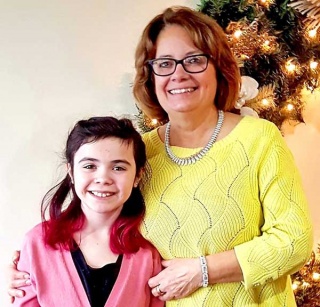 Trinity Coury, 11, is the youngest member of the Pucketos Garden Club of New Kensington.

She attends club meetings with her grandmother where she practices public speaking and learns about gardening and plant care.

PA Cyber’s flexible schedule options enable her to attend meetings during the day.

Trinity began attending the monthly garden club meetings about four years ago when the Pucketos crew named her an honorary member. She has gained public speaking experience by reading a poem at each meeting.

“Everyone at the garden club is really supportive,” she says. “Sometimes I read from my own poems, and I feel comfortable sharing my own words there.” She has also delivered presentations on herbs.

She has become an assistant to the garden club’s chaplain, Kathy Wescoat, who has been friends with several generations of Trinity’s family going back to her great-grandmother.

Last year Trinity won the Pucketos Garden Club’s poetry contest for children by writing an original poem about adventures in gardening. She then won the Garden Club Federation of Pennsylvania’s contest and eventually the National Garden Clubs’ contest.

Trinity began attending PA Cyber as a kindergartener, following in her sister and brother’s footsteps. Today she is in the gifted program and takes several advanced classes for her age.

Her mother Abbe says, “We love that she can work at her own pace. You can go at different paces for different subjects and spend more time on ones that you’re interested in.”

PA Cyber has worked well for all three of Abbe’s children. She states that her children have had many more options at PA Cyber than they would have at a public brick-and-mortar school. “Cyber school isn’t for everybody, but the people who it works for, it really works for them,” says Abbe. “The choice should be there.”