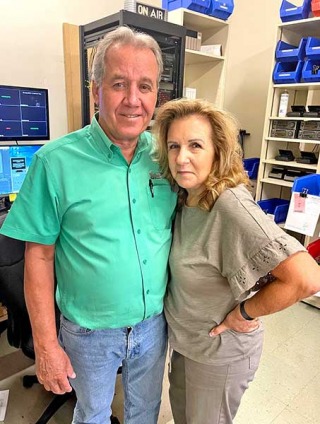 Tailor Made Film & Video Transfers, located in Feasterville, began as a hobby in the garage-turned-studio of long-time resident, Pete Wolk. Back in the early 1980s, Pete, an avid 8mm movie enthusiast, was the guy with the movie camera in hand at all the family functions. At that time, just when videotape camcorders first became popular, Pete looked into getting his own home movies converted to videotape and found that there were limited options. Realizing an opportunity, he researched equipment and the available technology for transferring film to videotapes. After consulting with experts in the field, he was directed to a local TV studio and soon invested in the same high-end film chain used at the studio. In 1985, Pete began transferring film for friends and family, and with the help and support of his wife, Donna, it soon developed into a side business. Word got out and local camera and video stores started using Tailor-Made as their trusted source for film to video transfers and business grew rapidly.

In 1988, they moved the business out of their garage to a rented shop on Bustleton Pike in Feasterville. Word spread through camera store networking groups and soon they outgrew the shop on Bustleton. In 1999 Pete and Donna purchased the 2000SF property at 205 E. Pennsylvania Boulevard in the Feasterville Business Campus, the current location of Tailor-Made. Staying at the forefront of technology by investing in the latest high-quality equipment and the work of the amazing staff of dedicated specialists employed at Tailor Made, account for the company’s remarkable success. Now servicing Ccamera and photo stores nationwide, Tailor-Made has earned the reputation of a trusted source for handling customer’s precious, irreplaceable home movie film, videotapes, slides, photos, and audio recordings. The caliber of their work, high-end equipment, and uncompromised integrity, qualify them to be commissioned by documentary film-makers, hospitals, universities, and film archivists to convert their analog materials to high definition digital files. Tailor-Made continues to be a family-run business and still operates in the Wolk family’s hometown of Feasterville – right in your backyard!