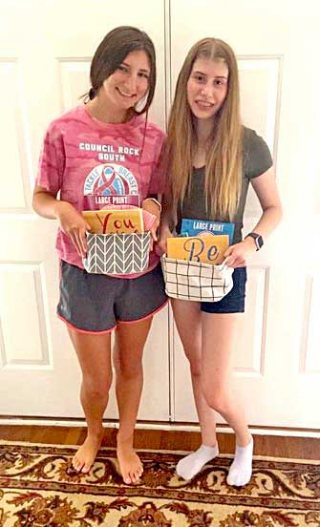 According to the 1947 Girl Scout Handbook, “A Girl Scout is ready to help out wherever she is needed. Willingness to serve is not enough; you must know how to do the job well, even in an emergency.” When the pandemic began, Girl Scout Cadette Megan Lindsay, of Ivyland, a Girl Scout Cadette found a way to exemplify the organization’s mission. Her grandmother was a resident at The Solana retirement home in Doylestown when she was faced with a difficult decision shared by many seniors as lockdowns began.

If she stayed at the retirement home, it would have to be for the duration of the lockdown, and she would not be able to leave or to see her family. Her grandmother decided to move in with Megan’s family. Megan was delighted at the opportunity to see her grandmother every day, but she worried about the other seniors left behind at Solana. She says, “I realized that a lot of the residents must be struggling with not being able to see their families, which was something my grandmother always looked forward to and enjoyed.” Megan says this bothered her a great deal. “They could be very confused, scared and not know what to do.”

Then an idea occurred to Megan. “I decided I wanted to make them feel happy and bring more positivity to Solana.” She created “Happiness Baskets” and filled them with little gifts. “I wanted to make them feel like people cared about them and were looking out for them.” Megan filled the baskets with snacks, activity books, Chapstick, and hand fans. Family and friends helped in cutting, sanding, staining, and painting uplifting quotes onto 67 mini wooden signs with messages like “Stay Positive, Be Happy, Start Every Day With A Smile, and You Are Loved.” The colorful signs were included in the baskets and delivered to each of the residents to put a smile on their faces in their time of being cut off from loved ones.

These Happiness Baskets became Megan’s Silver Award Project, a project that is required to address an issue at its root cause and make a long-term impact on the community. It is the highest award that a Girl Scout Cadette can earn.

The Girl Scouts organization began in Savannah, Georgia in 1912 when Juliette Gordon Low held the first meeting in her home with just 18 girls present. Low felt that girls were often held back by the narrow expectations society had of them. She wanted young girls to know about the many opportunities that existed beyond what was considered their family duties. She did things with her Scouts that were unusual for the time, things like taking them on camping trips, teaching them about astronomy and how to play basketball, all at a time when women had yet to win the right to vote.

The Girl Scouts came to play an increasingly important role in World Wars I and II by selling war bonds and working in hospitals. From the original 18, today there are 2.5 million Girl Scouts in the United States.

Megan became a Girl Scout in kindergarten when a friend’s mother was starting a troop and invited her to join. Megan will enter ninth grade at Council Rock High School South in the fall, and as a freshman, will become a Girl Scout Senior in rank.

Megan’s grandmother has returned to her home state of Maine and is doing well.