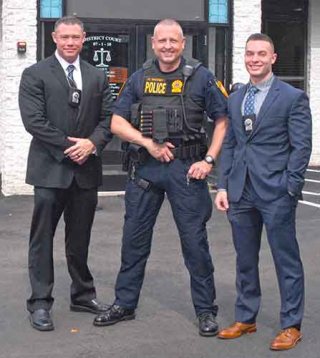 During the August 16th hybrid Falls Township Supervisors meeting, the board unanimously approved the hiring of Timothy Bishop and Dean Stecklair. Police Chief Nelson Whitney said the new officers will maintain the status quo of 53 uniformed officers. Officers Bishop and Stecklair will fill positions made available as a result of recent retirements.

A Philadelphia Police Department officer since 2019, Bishop, of Philadelphia, was an active duty U.S. Marine from 2013 through 2018. He was honorably discharged at the rank of sergeant. Bishop holds an associate’s degree in accounting from the University of Maryland.

Stecklair, of Northampton Township, is a married father of three. He has worked as an Amtrak police officer since 2010. Prior to becoming a police officer Stecklair served as a volunteer firefighter and union carpenter with the Philadelphia Carpenters Union. Stecklair has an associate’s degree in applied science from Thaddeus Stevens College.