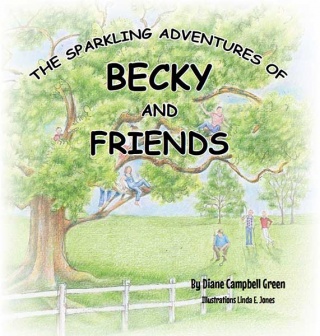 Those of us who grew up in the ‘50s and ‘60s remember summers when we played outside all day until dinnertime, and winters when the snowplows shoveled snow so high we could play “King of the Hill.”  Diane Campbell Green’s latest children’s book, “The Sparkling Adventures of Becky and Friends,” hearkens back to those idyllic times.  Set in Yardley Borough during 1961, Becky is a spunky, mischievous eight-year-old whose childhood and family are based on the author’s.  It’s a delightful chapter book for children to read themselves, or have it read aloud by parents and grandparents.

“I was actually a much quieter child than the fictional Becky, but my two younger brothers would tell you I was very bossy. My friend Sharon and I were close in age. She would egg me on and I would egg her on and we would get in some funny fixes. But we managed to get our way out of most of them without getting caught by our parents.” Diane still visits and telephones Sharon regularly.

Diane lived on Cadwallader Court in the Borough – the same street that the fictional Becky lives on – from 1952-1963. Some places mentioned in the stories are recognizable: Afton Library and Pond, the Yardley Florist and the Yardley golf course. Others are long gone, but familiar destinations for Becky: the A&P, Yardley Elementary School (now the site of Abrams Hebrew Academy), Scammel’s Quarry, the Yardley Bleachery (a chemical treatment plant), and the Yardley Water Co.  Each chapter finds Becky, her brothers, friends Sharon and David in benign, funny misadventures. My favorite is “Baloney Curls,” about Becky’s Shirley Temple doll. Somehow Becky and company always manage to get themselves out of trouble by the time the 5:00 Saw Mill whistle blows; if not, Mom’s dinner whistle summons them home.

“My parents were very firm, but they always retained a sense of their youth,” says Diane. “They took us to climb Bowman’s Tower and my father would do mischief himself the night before Halloween. We loved and respected them. We knew if we didn’t behave we were going to be punished. My parents went to Morrisville High and their first home was in Yardley. We had cousins all over in neighboring towns.”

While Diane was working full-time as an executive search firm researcher, memories from her childhood came to mind at about 2:00 or 3:00am. She would get up and write them down because she knew she’d forget them by morning. “In each of these stories there is a nugget of truth. There is something that actually happened, and sometimes more than one thing. I just wove the stories around those memories.”

An important theme of the book is how safe Yardley was back in 1961.  (As a 19-year resident myself, I would contend it still is.) The reason she emphasizes this theme is because “I know a lot of kids today would not be allowed to do the kinds of things that we did for fears of their safety…I [also] just wanted to compose positive, happy, humorous memories that would show children 12 and under the kinds of things they can do besides video games and the internet.”

Having retired five years ago, Diane and her husband have been residents of Tarpon Springs, Florida, for the past 30 years. Three years ago, she returned to our “peaceful little town,” visited Cramer’s Bakery, the old Grist Mill, and was surprised to see the clock that still stands on the sidewalk at the corner of Main and Afton.

“Santa and the Cotton Tree,” her first Becky Chalmers book, won a 2020 Royal Dragonfly Award sponsored by Story Monsters, a monthly magazine. Her third book in the series, “Goats and Ginger Floats,” will be published in mid-2022. She is currently at work on the fourth.  Diane’s illustrator is Linda Elizabeth Jones, an artist and teacher whom she met at her church. Linda also designed the cover of “This Was Their Time,” Diane’s fictional family history based on research via ancestry.com, a collection of family photographs, and a Civil War poster owned by her great-great grandfather who fought for the North. In September 2021 History Magazine will be publishing an article Diane wrote based on that poster.

Diane’s first book was “On Being Great Again,” a memoir of Dr. Jack Caleca, her uncle and the family’s patriarch. A medical doctor who served in the South Pacific, he was an avid photographer. Her aunt gave Diane a huge collection of his photographs – many of which he annotated on the back–that enabled her to reconstruct his life in the military.

To purchase Diane Green’s books, visit her website, www.dcgbooks.com. There you’ll receive a free copy of “The Diary of Emily Chalmers Gordon” (Becky’s granddaughter) when you purchase “The Sparkling Adventures of Becky and Friends.” Her books are also available at Amazon, Barnes & Noble, Ingram, and her publisher, Covenant Books.