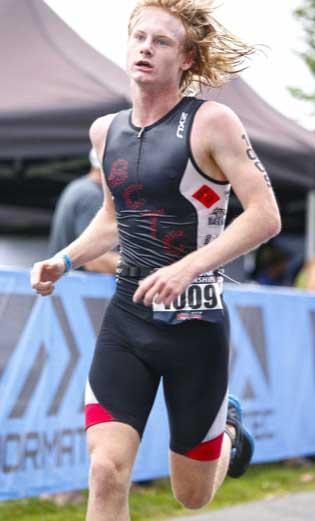 The event for 16- to 19-year-old competitors consists of a 300-meter swim in a lake, a 10K bike ride, and a 2.5K run. Though Ben was among the youngest of the age group, remarkably he won by over 20 seconds.

Two weeks later, Ben competed in the PA State Championship. He came in second overall against professional athletes of all ages and won the championship in his own age group.

Ben seems to be a born athlete, having started skiing when he was three. Thirteen years later, he says he has come to prefer “skiing in the trees,” a much more challenging version of the sport than slope skiing.

He also enjoys bicycle motocross, or BMX, a type of cycling performed on a bicycle made for off-road racing and stunt riding. He also participates in downhill and mountain biking.

Family and friends describe him as an avid outdoorsman who enjoys building campsites in the woods.

Ben didn’t begin competing in triathlons until he was 14, but in some ways, he has been training for them all his life. When he was little, he did all the usual sports, like baseball, basketball, tennis, and soccer. But eventually he realized the sport he enjoyed most was swimming. He refined his talent in the water further, when at age 10 he discovered that long distance swimming was where he really excelled. It was the mile swims where he really got going. While most competitive swimmers prefer the shorter races, Ben discovered he was at his best in races over 500 meters. He got serious about improving his strokes and began taking lessons from a swimming coach who had formerly done triathlons.

Ben had already started running track in middle school, while continuing with his BMX biking, so in 2019 he decided to participate in triathlons with the Bucks County Triathlon Club, an organization dedicated to bringing like-minded adult and youth triathletes together to train and race the sports of triathlon, duathlon, Xterra, and trail running. He really loved it, and that was why he took it hard when Covid hit and almost every triathlon was cancelled.

This year marks Ben’s first attempt at national competitions, and he has started off spectacularly. In addition to his sports activities, Ben manages to hold down two jobs where he can put his athletic expertise to practical use, one at Endurance Sports in Fairless Hills, where he sharpens and services skis, and tunes up and repairs bikes, and a second job at Lower Makefield Township Pool where he is a lifeguard and member of their swim team.

This fall, Ben will start his junior year at Pennsbury High School where he is a varsity cross country runner, and a varsity swimmer. He maintains his membership in the George School Aquatics Club, a competitive swim club for children aged 6-18, and continues to train with the Triathlon Club.

While athletic skill has come naturally to Ben, his young life has not been without difficulty and challenge. In September 2013, his mom, Karen, was put on a transplant list when her lungs began to fail. She had a double lung transplant in December 2014. She says that Ben “has had to be more grown up and helpful at home” than the typical teenager. Now Karen is experiencing kidney failure. “I’m home on dialysis,” she says, “and Ben has to do all the heavy lifting. I am on the waiting list for a kidney transplant unless I find a living donor. The average wait time for a kidney is five to seven years. I’ve been waiting two years so far.”

Ben hopes to go to college and major in sports marketing or business after he graduates from Pennsbury.