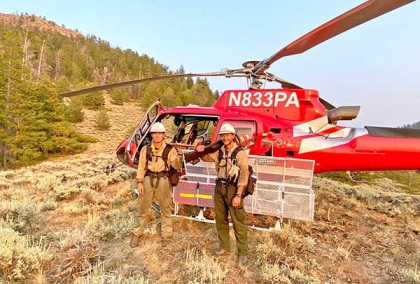 Tyler Smith, a Yardley native who grew up in the Westover neighborhood, is far from these moderate climes right now. A 2016 graduate of the University of Delaware with a major in geology, Tyler accepted a job with an environmental consulting firm in Delaware. After just one year he knew that an office job wasn’t for him.

He is currently on assignment as a helicopter manager trainee in Reno, Nevada. Tyler completed a Zoom interview with me right on the tarmac where his helicopter was parked. Our conversation follows in a question-and-answer format.

What led you to become a firefighter?

A buddy of mine was working at a similar environmental remediation company. We’d go climbing after work.  He mentioned that he knew a friend of a friend who was a firefighter out in California, and so he sold it as “she only works half the year and has winters off to travel and ski. Her season when she was fighting fire was all outside – hiking and camping.  I just thought what better job for me than doing exactly that all the time.

I took online courses required by the governing body that sets the standard for wildland firefighting: the NWCG, National Wildfire Coordinating Group.   I completed in-person training for about two weeks, which focused on basic fireline construction, hand-tool understanding, a brief introduction to using a chainsaw, some basic understanding of fire behavior and weather observation.

What was your assignment prior to coming to Reno?

I was helping staff our Type 3 helicopter, which is based out of Broomfield, Colorado. I was with a crew there for three months prior to this assignment here in Reno.  Back there the operational tempo of this year has been a little different than most.  We help out with some search-and-rescue operations that we might have to do in Rocky Mountain National Park.  We’ve been helping out with some of the flooding that’s occurring around the Fort Collins area.

Tell me about the helicopter you’re here in Reno to manage.

This aircraft was ordered up for a large fire, the Tamarack Fire, just south of us on the Nevada-California border.  Every fire is named, so when you first are on scene to a fire, one of the primary responsibilities is giving what’s called a size-up.  You relay back to the dispatch center what the fire behavior is, what it looks like.  You basically paint a picture of the fire for dispatch so that they know what resources to send, who to start notifying to get those gears moving.

Usually the names of fires come from local land features nearby.  For this one there’s actually a species of tree called a tamarack.  I can only imagine there was a stand of tamaracks nearby.  I remember I named two fires.  One of them [I named] the Strawberry Bench fire because there was the Strawberry Bench trail in Granby, Colorado that went right next to the fire.  I looked at the map, oh okay, it could be a peak, it could be a drainage, it could be a river or creek nearby. So that’s how people usually choose to name the fire.

This aircraft is a CH47 Chinook.   I’m in my helicopter manager trainee role right now, with a qualified helicopter manager from our crew.  Our crew’s name is Northern Colorado Helitack.  [Helitack crews are teams of wildland firefighters who are transported by helicopter to wildfires.]  Now we’re in Reno on what’s called a pre-position, so we’re standing by waiting out for an order to help out with fires.

What can you tell me about the CH47 Chinook?

This one that we’re managing has an internal tank which holds 2400 gallons of water, that gets pulled in 45 seconds.  [That’s] 19,000 pounds of water.  It has the ability to drop the water at certain intervals over the fire or it can release that all in one go.  That’s all under the pilot’s control and whatever the ground resources need.  Our helicopter that we use back in Broomfield, Colorado, is about a third of this and at maximum capacity it can hold about 180 gallons of water.  But right now, because of different features that affect the helicopter’s performance, we usually are able to get about a 144 gallons per bucket while the pilot is working fire.

Your helicopter lands on the ground, but aren’t there also firefighters who will jump from helicopters?

They’re called smoke jumpers. A lot of the jumpers are based out of Alaska because that’s where it’s more difficult to access wildfires.  They’ll utilize them up there because it’s faster to fly them out and b) it’s easier for them to access by parachuting down.  At one point I did have aspirations to become a smoke jumper, but it’s an extremely competitive position.  A lot of ex-Special Forces members actually become smoke jumpers.  The physical requirements for it, let alone the requirements for where you are in your career, [are demanding].  The smoke jumpers are by far the most specialized and prestigious firefighters that you have on the fireline.

What are your responsibilities as a helicopter manager?

For these helicopters of Type I classification, I am the government representative.  Because the government has a contract with a private company such as this one, Billings Flying Service, I’m here to interpret and execute the policy that’s stated within the contract, and make sure that this vendor is paid, as they should be.

It is almost purely paperwork on this side.   It’s more of a logistical role than I would be performing with my home unit with my crew back in Colorado, where that’s more operational and a little bit more tactical.  Below me [hierarchically] are firefighters.  I’m a senior firefighter.  Above me are squad leaders, captains, and two superintendents.  [I’m part of] a 12- person crew including two women.  Since my first crew, on all the helitack crews I’ve been on, there have been two women on every one of those crews.

(Editor’s note: Our conversation with Tyler Smith will continue next month.)

PHOTO CAP: Tyler Smith (right) and a co-worker next to their A-Star Helicopter after an initial attack fire in Colorado.