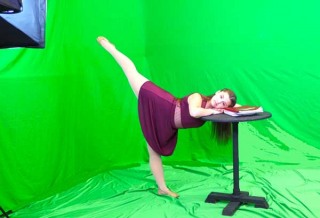 At Step II Dance Center, we have done competitions and won loads of awards this year.

She has performed professionally, and recently performed in a music video filmed at Step II for an up and coming artist.

The dance teachers at our studio have auditioned and performed.

We have Jomarie, who is constantly performing at The Music Mountain Theatre in Lambertville, NJ. She has a wonderful voice and is a fabulous dancer and teacher.

We’ve had an Acro teacher who is now an Eagles Cheerleader.

We also have a Broadway performer who comes down from time to time to run a dance workshop. He is also a writer and has produced short films as well as a play for the Strawberry Festival in NY.

“I have also done private lessons for one of my students who is now on TV with an awesome part,” says owner, Pat Krzywonos. “Before the pandemic, our kids were in a show with Sally Fields. We had 12 ballet students they needed for a dance class scene.”

Pat says she also regularly get messages from an agent looking for kids.

Our Irish class performs in the St Pattys Day parade and we also perform praise dance in churches.

We do it all or as much as we can. We have also done fashion shows for Macys and boutiques.

We perform A Christmas Carol at the Silver Lake Nature Center every year. “Until the pandemic, we did it for over 25 years,” Pat says. “The kids get a big kick out of it.”

We are in the Vermillion Square Shopping Center next to Music Forte.