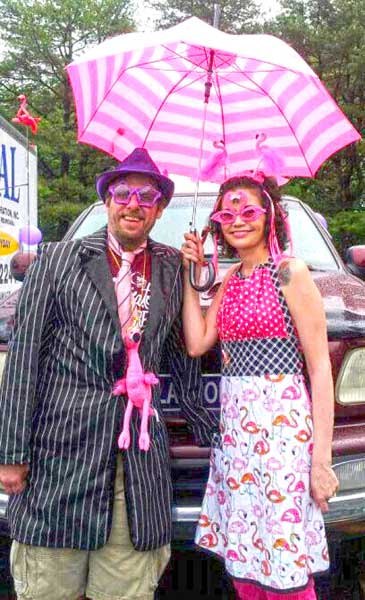 The story behind the Pink Flamingo

A lot of people ask why I have a Flamingo as my mascot for Fletcher’s Garage. It’s a long story but as you read through it’ll make sense.

About 12 years ago now, I was Event Chair of the Relay For Life of Fairless Hills.

She immediately touched all of our hearts and became a great friend to all of us. Even though prognosis was grim, she vowed to fight with all she had.

She had so many fundraising ideas and her determination motivated the whole RFL “family”. Her most successful was the “Flocking.”

It was to put a number of the plastic Pink Flamingos on a yard and that person had to donate to get them off the lawn and “pay it forward.”

She and her friend got me first! I loved it and paid it forward (and so on, and so on…) It went on and on and she was doing them by herself for a while, so I offered to help her. We had such a blast doing it and raised over $3,000 throughout the campaign.

We were dubbed the “Flocking Queen” and “The Godflocker” and dressed the part for the parades to raise awareness for the RFLFH.

As the Cancer took her over, I took over the Flocking for her as she fought her fight. She passed away in 2012 after the most courageous fight up until the last minute that you can’t even imagine.

She left a huge hole in our Relay but most notably, our hearts.

When I opened Fletcher’s Car Wash on Trenton Road in 2013, I was thinking of a catchy logo, and it was suggested a Flamingo.

I thought “heck yeah!” how appropriate for the car wash and this was my way of honoring Neysa’s memory.

Nobody knew the Car Wash as Fletcher’s, it was the “Flamingo Car Wash.”

Now that we are Fletcher’s Garage, it’s only right to keep it going and keeping Neysa’s memory going with it!

Please keep her in mind as you drive down Hood Boulevard and please always keep in mind our Relay For Life of Fairless Hills at Pennsbury HS when you see ads and fundraisers! Relay is not just an event, it’s a way of LIFE!

At Fletcher’s Garage, it’s about more than cars. It’s about Community. And that’s the story…

PHOTO CAP: The Godflocker and the Flocking Queen