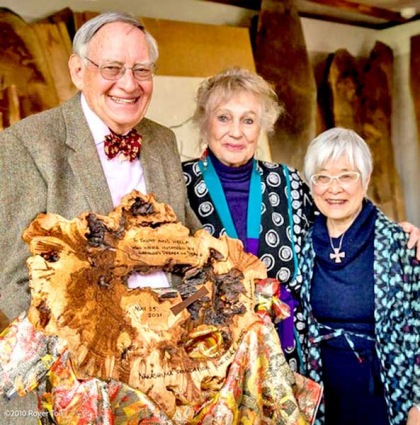 Scott and Hella McVay, residents of Princeton, NJ, were awarded the second Nakashima Foundation for Peace Award at the foundation’s home in New Hope on May 23rd.

Scott is a life-long poet, naturalist and philanthropist who has worked to promote education, women’s rights and environmental concerns.

According to Mira Nakashima, “[Scott] was very close friends with my father and he and Hella are longtime supporters of my father’s vision and the work of the Peace Foundation.”

The Nakashima Foundation for Peace is a non-profit organization whose mission is to create sanctuary areas for peaceful activities through the placement of Altars of Peace on the world’s populated continents.

George Nakashima was a native of Spokane, Washington who settled in New Hope after he was set free from a World War II Japanese internment camp in 1943.

George was an architect and furniture builder who was an internationally recognized innovator in the field of handcrafted wooden furniture design.

He created his works on his property on Aquetong Road.

During his life, George was commissioned by famous luminaries to create his signature furniture. His former workshop is now the location of the Peace Foundation.

George dreamed of world peace. He was very troubled that the world is constantly at war and stated that at best, the nations of the world live with a “balance of terror.”

According to his daughter, Mira, who is on the board of the Nakashima Peace Foundation, “My father’s dream of peace was a result of his experience with severe racism against the Japanese Americans that resulted in our internment in Idaho in the 1940’s and also his experience living in Pulmitiri India in the 1930’s doing an architectural job. While in India, he became a disciple of Shri Aurobindo whose teachings and community stressed people from all walks of life living in peace.”

“In 1984 my father crafted his first Altar of Peace out of a walnut log. When he came upon such a large piece of walnut tree, he knew he had to do something important with it. ”

They are large-scale tables constructed of large wood slabs joined with butterfly joints with smooth tops but unfinished natural edges.

George placed his first wood-carved altar of peace at the Episcopal Cathedral of John the Devine in New York City on New Year’s Eve of 1986.

This peace altar was dedicated to the continent of North America.

Mira says, “My father began the work of forming the foundation as a non-profit organization in 1984.  It was finally incorporated as a 501 3(c) in 1986. He wanted it to be funded by people from all over the world in small denominations. He felt that peace would not occur through government or simply through the deep pockets of the rich. He thought it could only be achieved through a grass roots movement of many people.”

The foundation also made it part of their mission to periodically give a peace award to recognize people who have worked towards the goal of world peace.

According to Mira, “A member of the Nakashima Peace Foundation named Julian Lines came up with the idea for the peace award. He was aligned with peace-oriented spiritual leaders in New York in the 1970’s. He was also very close to the people in Auroville, India and friends with my father since the 1970’s.”

“We awarded the first Peace Award to James Parks Morton who provided the home for the first peace table in New York.  It was awarded a number of years ago as the award is not given regularly each year.”

Scott and Hella are the second recipients of the award. Scott has served on the board of the Earth Policy Institute and the World Wildlife Fund. He and Hella created the Dodge Poetry Festival and the Poetry Trail at the Greenway in Princeton.

The Dodge Poetry Festival’s mission was to “elevate poetry in our culture” when it was created 30 years ago. The festival has been instrumental in promoting poetry in New Jersey’s schools, and inspired journalist Bill Moyers to film three PBS specials covering the festival.

If you are interested in inquiring about the Nakashima Foundation, becoming a member, or volunteering you can contact them online at nakashimafoundation.org.

PHOTO CAP: From left, Scott and Hella McVay with Mira Nakashima at the award ceremony.