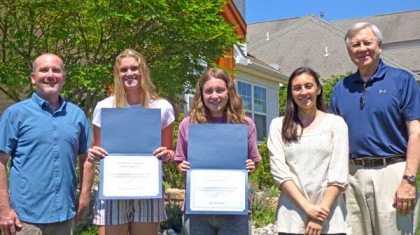 The awards were announced during the June 16th graduation ceremony.

“Katharine and Rylie were selected to receive AWA scholarships based on their scholastic achievements, community activities and their desire to pursue further education in the physical sciences,” said AWA’s president, Michael Zolkewitz. In the fall, Katharine will attend Penn State University and plans to major in earth science.

Rylie plans to attend Northeastern University and focus her education on finance and sustainability policy.

The AWA established the Malcolm P. Crooks Scholarship in 2013 to be awarded to a civic-minded New Hope-Solebury High School senior who has displayed excellence in science and who plans to continue his/her formal education in the broad field of physical sciences.

“The scholarship honors Malcolm’s many outstanding contributions, regionally and nationally, which has fostered a greater public appreciation for conservation and the value in protecting the environment,” Les said. “Malcolm’s work in our community will forever serve as an excellent example of how one individual can make a lasting impact.”

Malcolm was a lifelong environmentalist and the founder of many conservation-oriented nonprofit organizations including the AWA.

The AWA was formed in 2007 as an all-volunteer non-profit organization whose mission is to conserve, preserve and protect the natural resources of the Aquetong watershed.

The Aquetong watershed covers about eight square miles and drains its surface and groundwater through Solebury Township and New Hope Borough to the Delaware River.

Since its formation the association has served as the voice of the Aquetong watershed to the community and to Solebury Township and New Hope Borough elected officials.