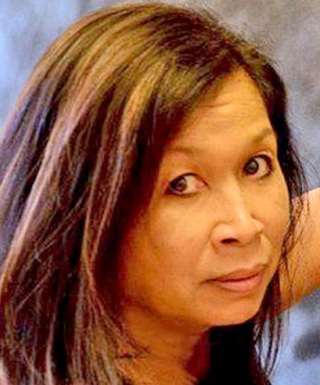 Earlier this spring, printmaker and multimedia artist Chee Bravo, a member artist of the New Hope Arts Center, presented her collection of silkscreens from her subway musician series at River House at Odette’s.

Born and raised in Trinidad and Tobago, Chee moved to Florida to complete a BFA degree in printmaking from Florida International University (FIU) in Miami.

When her husband’s work brought them north in 2011, Chee gave up her 20-plus-year career as a graphic designer to focus on her art full-time.

By 2015 she became a member of the printmaking studio Frontline Arts, which would enable her to create her silkscreens.

In her first trips to New York City, Chee was fascinated by the musicians who perform in the subway stations.

She discovered that they have to audition for the program “Music Under New York” to receive lifetime licenses to perform.

Chee wanted to capture their joie de vivre, which reminded her of the annual festive Trinidad and Tobago Carnival held one week before Lent.

Subsequently, in her travels to such cities as Barcelona and Paris, Chee began each trip seeking out subway musicians to photograph, the first step in her silkscreen process.

“A lot of people don’t understand what’s involved in screenprinting. If you tried to reproduce it, you wouldn’t get the exact same product. They’re not copies, they’re manually pulled through the press. To get at least 10 originals I have to make 20 and choose the 10 that look similar, and then it’s called an edition. They’re a form of art, depending on how you use it and how you manipulate it, which is what I think I do.”

For “Barcelona,” Chee wasn’t satisfied with the plain white shirt of the guitarist in the foreground. Thus she went back to the digital collage to add the 14th color/screen a graphic pattern of concentric circles found on his shirt in the final version.

“’Barcelona’ is the most ambitious one, in that it has 14 colors. I had to print 14 screens for each color. Each piece had to go through the press 14 times.”

When Chee schedules a silkscreening session at Frontline Arts, she usually works through the night to complete it. “Barcelona” is in the permanent collection of Trenton City Museum.

Other examples of her art are in the FIU permanent collection, the Brooklyn Art Library, Frontline Arts of NJ, and private collections. 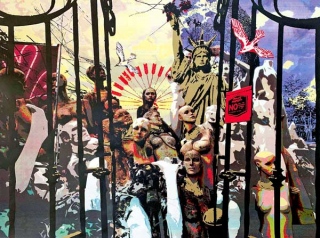 Making its debut at the River House show was Chee’s “Les Demoiselles du New Hope-LOVE,” which was inspired by the graveyard mannequins beside the iconic store Love Saves the Day. She says they reminded her of Picasso’s “Les Demoiselles d’Avignon,” hence the title of her work. A black portal traps the mannequins as well as the prominent and stern-looking Statue of Liberty in the background.

Because it was 28”x37”, much bigger than her usual sized pieces due to press limitations, she worked with a print lab in Brooklyn that had the right size press to accommodate it.

It’s ironic that in a year when Chee decided to stop applying to curated shows and focus on her art, more work than ever before has come to her.

In August, she will be one of 10 artists chosen to hang banners across the TRANSITional project at the Trenton train station.

One of her four banners will feature Trenton’s jazz and blues series at the Candlelight Lounge, which for more than 50 years draws famous musicians from New York and Chicago.

For September, Chee was selected to present a demonstration of the silkscreen process with audience participation at Grounds for Sculpture in Hamilton, NJ.

Another facet of Chee’s art are multimedia installations. Her most recent was in 2020, entitled, “Cover-up,” which was meant to reflect the political climate of the Trump administration. At a show in Stockton, NJ, she recycled a battered piece of plastic by taking many black-and-white videos of the plastic falling through the air.

Observers at the show were asked to write on shards of black poster board, in invisible ink, what they took a cover-up to mean. Black light would reveal what they wrote.

This installation was also shown at the Alpha Art Gallery in New Brunswick and the Monmouth Museum in Lincroft.

Chee’s ideas are always percolating. She’s made a sketch for her next installation, “Our Labryrinth,” meant to focus on the issue of women’s suffrage.

Light, music, and transparent slabs inscribed with the names of famous suffragettes such as Elizabeth Cady Stanton and Lucretia Mott, as well as the names of contemporary women who have broken “the glass ceiling,” including Vice President Kamala Harris and former Senator and presidential candidate, Hillary Clinton, will comprise the work.

The 19th amendment, which gave women the right to vote, will be visible in the installation, for which Chee hopes to receive a grant.

For a full view of Chee Bravo’s work, including her Deities series and other multimedia installations and videos, access her website, jcheebravo.com and read her insightful blog.

You can also reach her on social media via #cheebravo and @cheebravo.

Lately she’s been posting reels, or short videos, on Instagram.