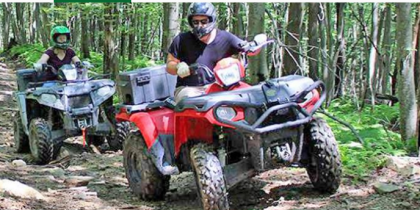 The state Department of Conservation and Natural Resources (DCNR) said the pilot program will launch on July 16th and run through Sep. 26th. It’s opening state forest roads, snowmobile trails, and PennDOT roads previously not designated for all-terrain vehicles (ATVs), in response to growing demand in the state for riding opportunities.

“There are a lot of people who have ATVs and might have to travel several hours to use them legally,” Robinson explained. “That was a big reason behind this, because there’s just a high level of interest in folks wanting to ride ATVs in the state.”

The DCNR acknowledged environmental and noise concerns accompany the use of ATVs. Robinson pointed out during the pilot, they will conduct environmental monitoring to gauge its impact.

Sarah Corcoran, conservation program manager for the Sierra Club Pennsylvania chapter, said she hopes the agency examines the effects of illegal riding that could occur.

“It’s going to be tough for folks to not be on those trails after the pilot’s over,” Corcoran cautioned. “I want to know what their enforcement practices are going to be during the pilot program, to make sure that folks are only riding where they’re allowed to be riding.”

She added the public comment period should open lines of communication to ensure concerns are addressed.

“That’s what the pilot program is to prove to PennDOT, to DCNR, to Harrisburg,” Sorgen argued. “That we can do this and bring in tourism and boost the sales of gas and food, and hotel and campground stays, in our region.”

The pilot will reconvene in May 2022 for a second round, and will include a connector to the Tiadaghton State Forest and the Haneyville ATV Trail System in Lycoming and Clinton counties.