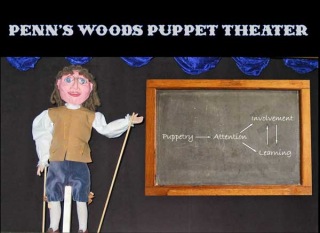 Puppetry not only gets a child’s attention but also promotes participation.

Play and learning go hand-in-hand. Kids want to learn and have fun; puppetry provides both.

This is where Penn’s Woods Puppet Theater steps in.

Its plays introduce young audiences to large historical figures such as Ben Franklin and Lydia Darragh, the Quaker spy who saved General Washington from a British attack while encamped at Whitemarsh.

But we don’t forget the history in our own backyards. In Horsham stands the home of Elizabeth Graeme, once engaged to Franklin’s son, William. She is dubbed by her biographer as “the most learned woman in 18th century America.” In Doylestown the home and chapel still exist where runaway slave “Big Ben” Jones lived and worked.

Penn’s Woods encourages historic sites and organizations whose aim is teaching young patrons about our past, to contact us with their ideas. We can help!