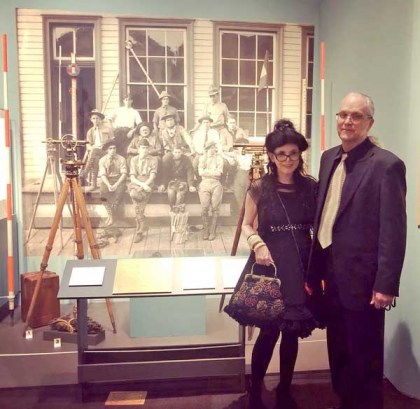 The ways we have measured everything from the acres of land beneath our feet to the angle of the stars in the sky has evolved as we do, and the Mercer Museum is paying homage to the clever instruments fashioned since the early 18th century as civilization began in America, in a new two-part exhibit.

“We’re excited to get people back out to the museum,” said Cory Amsler, VP of Collections and Interpretations, who pieced the children and family-focused interactive exhibit together.

Fun for the whole family, the first half of the exhibit, ‘Measurement Rules’, is a traveling exhibit from the Children’s Museum of Pittsburgh.

This places an emphasis on STEM education with two stand-alone exhibits that are also interconnected.

In the second half of the exhibit, you’ll travel back in time.

Jim Hill and his wife Kathryn Hausman, two Bucks County residents who have spent the past fifty years perfecting their private collection, are featured in ‘Magnificent Measures!’. The couple helped host a preview of the exhibit featuring items they have collected for decades to members of the local press before the exhibit opened to the public on May 23rd.

“This collection reflects a general historical view of American culture and living,” Jim says. “Back in the days where you made everything.”

Reflective of what the Mercer Museum represents, in tribute to the wave of inventiveness throughout the 19th century indicative of Henry Mercer himself, this collection is sure to amaze and inspire.

“So many people today, especially kids, are forgetting history,” says Kathryn. “We hope this exhibit will help bring back that interest.”

One of the most intriguing tidbits I took from the exhibit isn’t something you can read on a placard; Jim shared many fascinating facts with the group, including that the equatorial telescope featured there (created by a German immigrant), has a crosshair made of spiderwebs for elasticity. In London, many telescopes featured a crosshair made from silver, which would morph in heat.

Fashioning it from spiderweb allowed a durable fiber perfect for this stargazing invention.

Jim and Kathryn are proud of the items from their private collection which are now on display through September 6th.