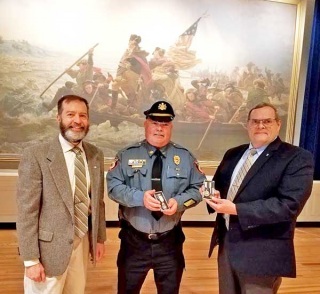 Members of the Washington Crossing Chapter awarded the SAR Law Enforcement Commendation Medal to Detective Fox for his long and dedicated service within the Telford Borough Police Department. Detective Fox’s continuing professional efforts have resulted in the successful completion of many key investigations and have strongly supported the overall protection of the citizens of Bucks and Montgomery counties.

As his department’s only detective, he has adeptly coordinated joint investigative efforts with the FBI, DEA, other local police departments, and Pennsylvania State Police. Detective Fox has received many awards for his service including the Montgomery County Outstanding Police Performance Award, the Telford Borough Chief’s Award of Excellence (the highest award issued by the Department), and the Citizens Crime Commission Outstanding Police Performance Award. His notable and dedicated service brings lasting credit to both him and the Telford Borough Department. Detective Fox was also presented with the SAR Military Service Medal in recognition of his previous honorable service in the US Military.