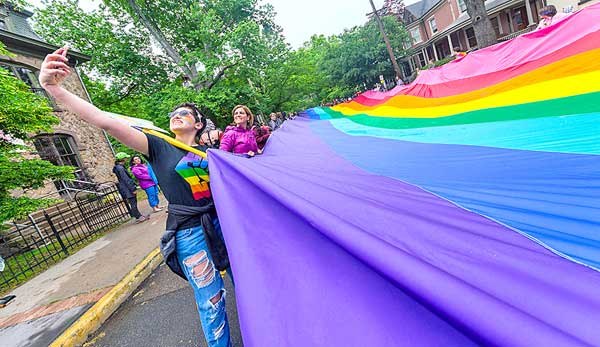 New Hope Celebrates has announced their adoption of the Progress Flag. Since the organization’s inception in 2003, along with many other LGBTQ+ groups, the six striped rainbow flag created by Gilbert Baker in 1978 has been a symbol of pride and solidarity among the gay community. However, in recent years, the need to become more inclusive and raise awareness for transgender and minority communities has ushered in new symbols as a way to expand our representation.

When asked about the Progress Flag, Matt Hanson, President of New Hope Celebrates, said, “We have many reasons to continue the Pride movement for minority groups of people in our communities, such as transgender individuals and People of Color (POC) who need and deserve equality. New Hope Celebrates has formed an Inclusion, Diversity, Equity, Accessibility, and Anti-Racism (IDEAA) committee to acknowledge this problem and start working on a solution. We could not be more excited to exhibit our commitment to this cause by showcasing the Progress Flag during our Annual Flag Unfurling on Saturday, May 8th.”

The rainbow Pride Flag became a symbol of the bisexual, gay, lesbian, and queer communities in 1978. In 2017, the city of Philadelphia reimagined the original Pride Flag with the addition of two more horizontal stripes – black and brown – on top of the original rainbow. As a further push to recognize the LGBTQ+ community, in 2018 designer Daniel Quasar acknowledged the presence of the trans community by adding the colors white, pink, and light blue. In addition to these colors, Quasar included a chevron pattern into the original 1978 flag to then create the Progress Flag that NHC will proudly display moving forward.

NHC has always made every effort to remain loyal to the growing needs of the LGBTQ+ community and the adoption of the Progress Flag is another step in this process. The Flag Unfurling marks the beginning of NHC’s Pridefest, and a different kind of gay pride celebration. The group also has plans to highlight Hispanic Heritage Month in September, and future events aimed to recognize the importance of the intersection of the LGBTQ+ community and POC. To learn about their upcoming LGBTQ+ events, visit https://www.newhopecelebrates.com/events-calendar/.